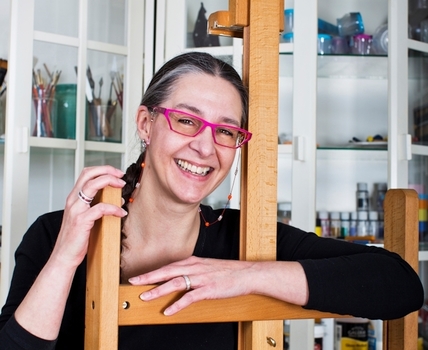 I’m a Dutch-Argentine artist (born in the Netherlands, 1962) painting contemporary realist still lifes. I seek to capture the fascinating interactions between colors, light, shadows, textures and reflections, and unite them in visual poetry.

During my thirty+ year career my artwork has received many prestigious awards, and has been exhibited in well over 150 gallery and museum exhibitions in Argentina, Belgium, Canada, Denmark, Estonia, France, Germany, Japan, the Netherlands, Spain, Taiwan, the United Kingdom, and the United States.

Five of my bronze statues enjoy permanent public installation in Wassemaar, the Netherlands.

In 2010 my work appeared in the eminent art history book by Professor Katlijne Van der Stighelen entitled Vrouwenstreken, Unforgettable Female Painters from the Low Countries from 1550 until today (Dutch language, published in Belgium and the Netherlands). In this prestigious book I am named as one of the 100 most noteworthy women artists of the Low Countries.

During the past several years I've written essays for PoetsArtists, Beautiful Bizarre, catalog introductions, and undertaken several curatorial projects. Currently I publish essays on Medium. My articles can be found on this website under Art Blog.

I currently live and work in Antwerp, Belgium.